(The following is a joint release from the Naperville Police Department and the DuPage County State's Attorney's Office.)

DuPage County State’s Attorney Robert B. Berlin and Naperville Chief of Police Jason Arres announced today that the State’s motion to deny bail for a Chicago man accused of illegally possessing a loaded firearm and approximately 17.4 grams of cocaine has been granted. Jerry Hill, 39 (d.o.b. 2/16/1983) of the 2100 block of W. Estes Avenue, appeared at a bond hearing this morning where Judge Margaret O’Connell granted the State’s motion to deny bail. In all, Hill has been charged with one count of Armed Habitual Criminal (Class X Felony), one count of Aggravated Unlawful Use of a Weapon – Prior Conviction (Class 2 Felony), one count of Unlawful Possession of a Controlled Substance (Class 4 Felony) and one count of Contributing to the Delinquency of a Minor (Class 3 Felony).

On August 1, 2022, a Naperville police officer conducted a traffic stop on a vehicle for allegedly driving 40 mph in a 25-mph zone. Upon initial contact with the driver, later identified as Hill, the officer allegedly detected an odor of cannabis coming from the vehicle. After ordering Hill and another occupant, a juvenile, out of the vehicle, it is alleged that the officer located a loaded Smith and Wesson SD 40 VE pistol with one bullet in the chamber, approximately 17.4 grams of cocaine and bags of cannabis. Hill was taken into custody at this time.

“It is alleged that Mr. Hill, a convicted felon currently on parole for drug charges, was illegally in possession of a loaded handgun as well as more than seventeen grams of cocaine,” Berlin said. “This is the fourth time within one month that a DuPage County judge has denied bail for a defendant accused of serious crimes. The message coming from DuPage County is crystal clear, career criminals are not welcome and we will use every tool at our disposal to aggressively pursue and hold accountable anyone who would commit a crime while in DuPage County. I thank the Naperville Police Department for their outstanding work on this case that allegedly took a dangerous weapon out of the hands of a convicted felon. I also thank Assistant State’s Attorney Denis Cahill for his efforts in preparing a strong case against Mr. Hill.”

“I cannot commend our officers enough for the proactive policework they are doing every day, leading to arrests just like this one,” Arres said. “Traffic stops alone have led to the seizure of 71 illegally possessed firearms in Naperville in the first six months of this year. I can promise our residents and community members that the Naperville Police Department will continue to be diligent about taking illegal weapons off our streets, and I thank DuPage County State's Attorney Bob Berlin's office for their continued efforts to hold offenders accountable.”

Hill’s next court appearance is scheduled for August 26, 2022, for arraignment in front of Judge O’Connell. 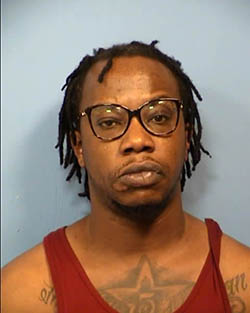