Bond Set at $1 Million for Naperville Man Accused of Murder

(The following is a joint press release from the Naperville Police Department and the DuPage County State's Attorney's Office.)

DuPage County State’s Attorney Robert B. Berlin and Naperville Chief of Police Jason Arres announced today that bond has been set for a Naperville man charged with the shooting death of forty-one-year-old Jeffery Churchill. Xavier Caffey, 30 (d.o.b. 3/13/1991) of the 900 block of Fairway Drive, appeared in Bond Court this morning where Judge Leah Bendik set bond at $1 million with 10% to apply. The State had asked for a bond of $5 million with 10% to apply. Caffey has been charged with two counts of First Degree Murder.

On February 4, 2022, at approximately 8:30 a.m., the Naperville Police Department responded to a call of shots fired at an apartment building located at 960 Fairway Drive. Upon their arrival, officers found Churchill lying on the ground suffering from an apparent gunshot wound to the head. Officers immediately rendered aid. The Naperville Fire Department arrived at the scene and transported Churchill to a local hospital where he was pronounced deceased at approximately 9:19 a.m. When processing the scene, officers found one 9 mm shell casing and one unspent 9 mm ammunition round. It is alleged that prior to the shooting, Churchill, who was employed as a maintenance worker at the apartment complex, and another individual were inside a garage at the apartment complex when Caffey walked into the garage, pointed a handgun at the other individual, then pointed the handgun at Churchill and shot him twice in the head. It is alleged that after shooting Churchill, Caffey left the garage and returned to his residence. Following an hours-long standoff with the Naperville Police Department Crisis Negotiation Team, Caffey surrendered to authorities later that afternoon without further incident.

“The allegations that Mr. Caffey, who was completely unprovoked, approached an innocent, unsuspecting man, put a gun to his head and pulled the trigger twice, killing him execution style, are very disturbing,” Berlin said. “I offer my sincerest condolences to the family and friends of Mr. Churchill as they attempt to come to terms with this senseless tragedy. I commend the Naperville Police Department, particularly the Crisis Negotiation Team for their outstanding work in bringing the suspect in custody without any further violence. I also thank Assistant State’s Attorneys Helen Kapas, Lynn Cavallo and Denis Cahil for their efforts in preparing a strong case against Mr. Caffey.

“Naperville has a strong foundation as a safe community, and this type of crime can be extremely jarring to that sense of safety. Violence of any kind will not be tolerated by this department, and we will continue our efforts to combat gun violence at every turn,” said Naperville Police Chief Jason Arres. “I want to commend the expedient actions of our officers that led to a quick identification of a person of interest as well as the witnesses who stepped forward to help. The collaboration and hard work our Investigations Division and the DuPage County State’s Attorney that lead to charges must be recognized, as well. I would also like to thank the Kane County Sheriff’s Office and the Bureau of Alcohol, Tobacco, Firearms and Explosives for committing resources and personnel, which contributed to the peaceful apprehension of the suspect.”

Caffey’s next court appearance is scheduled for February 28, 2022, for arraignment in front of Judge John Kinsella. If found guilty, Caffey faces a penalty of forty-five years to life in the Illinois Department of Corrections. 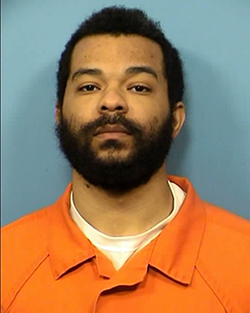