On Sunday, Feb. 6, 2022 at approximately 5:46 a.m., Naperville Police Officers responded to a burglary in progress at 1701 Quincy Suite 11, Mike’s E-Bike Shop. Responding units encountered a lone male subject exiting the business’ front door and enter a nearby moving van. The subject then used the van to strike a squad car but would subsequently lose control and run into a snowbank shortly after getting onto the roadway and became stuck. The subject then tried to escape on foot but was quickly captured by the officers on the scene.

The preliminary investigation indicates that the subject used an object to shatter the glass on the front door and gain entry. From there, he loaded two bicycles from the business into the van prior to the arrival of police. Those bicycles were recovered from the scene along with other contraband that is being investigated.

Thaddeus J Harper, 41, 1400 block of S. Blue Island, Chicago, is charged with three (3) felony counts that include: burglary, theft, and possession of burglary tools. Harper also faces several misdemeanor charges from this incident that include: fleeing or attempting to elude a peace officer, reckless driving, resisting or obstructing a peace officer, possession of drug paraphernalia, and unlawful use of a weapon. 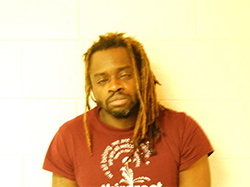 Anyone with information regarding this incident is encouraged to contact the Naperville Police Department at (630) 420-6665 and ask for the Investigations Division.

The Naperville Police Department wish to remind the public and the news media that a charge is merely an accusation and a defendant is presumed innocent unless proven guilty.