Construction Update: The International Union of Operating Engineers Local 150 strike has been resolved. Construction activities are scheduled to resume Monday, Aug. 8 along the north side of North Aurora Road and continue through the fall.

This project is expanding the roadway between Fairway Drive and Frontenac Road to accommodate two lanes of traffic in each direction as well as a center turn lane, multi-use trail and sidewalk, with lighting and drainage improvements and a sound wall. Work on this phase of the project is expected to be complete by late 2022.

Work to drill and set posts for the sound wall along the north side of North Aurora Road is underway. Once all posts are in place, installation of the sound wall panels will begin. 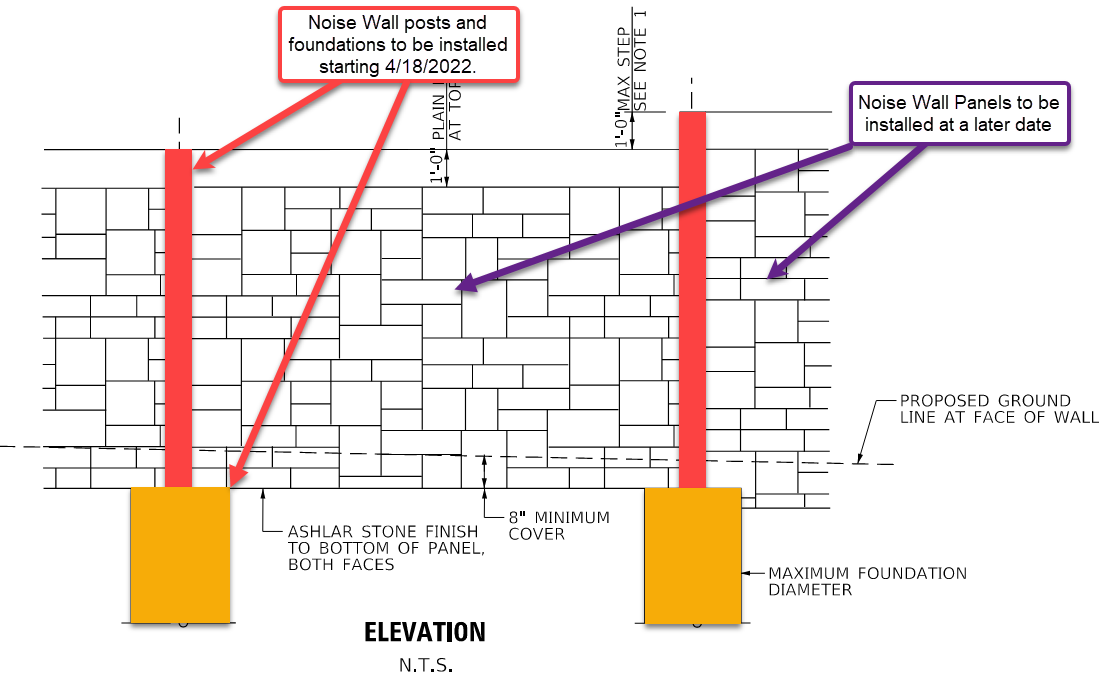 Improvement Phase 1: The first phase is being conducted in partnership with the Naperville Township Road District to improve and widen the pavement between Fairway Drive and Frontenac Road. The scope of the project consists of widening the existing three-lane road to accommodate two traffic lanes in each direction, with a center turn lane, multi-use trail and sidewalk, as well as a sound wall and improvements to roadway lighting and drainage. Utility relocation work began in January 2021 and the project went to bid in March 2021. Storm sewer and temporary pavement work began in April 2021. Road construction on North Aurora Road began in May 2021 and resumed in March 2022 after a winter shutdown. The current traffic pattern, with work taking place on the north side of the roadway and traffic using the south side, is expected to remain in place until projected completion of the first phase of work in late 2022.

Improvement Phase 2: The second phase of work will improve the Canadian National/Wisconsin Central Railroad bridge over North Aurora Road in collaboration with the Naperville Township Road District and the City of Aurora (as each agency has jurisdiction over a portion of the roadway along this corridor). The scope of the project consists of replacing the roughly 110-year-old railroad bridge with a new structure that will span the newly expanded five traffic lanes on North Aurora Road, as well as the multi-use trail and sidewalk. In addition, roadway lighting, a pump station and increased vertical clearance will be provided. This project is currently scheduled to go to bid in November 2022, with construction expected to be complete in 2025.

The City of Naperville began work in 2006 to secure funding to improve sections of North Aurora Road to reduce vehicle congestion and crashes and improve access for bicyclists and pedestrians in the area. North Aurora Road between Route 59 and Pennsbury Lane is a traffic bottleneck because it is the only remaining section of this corridor with a single lane for traffic in each direction for several miles on either side. Existing traffic already exceeds roadway capacity, and traffic is expected to grow to nearly 33,000 vehicles a day by 2040. The City is conducting this roadway improvement project in two phases, one to widen the road and add pedestrian and bicycle access, and another to replace a roughly 110-year-old railroad bridge in the project area.