Considered the "Crown Jewel" of Naperville, the Riverwalk is a place of beauty and tranquility along the West Branch of the DuPage River. Created in 1981 to honor Naperville’s 150th anniversary, the Riverwalk features 1.75 miles of brick paths, fountains, bridges, meeting and event places, outdoor sculpture and artwork, recreational facilities, and celebratory memorials. The Riverwalk is a preferred destination and an ideal place to stroll, unwind and reflect. Come relax and enjoy the scene.

(Photos above and in gallery below courtesy of Jo Lundeen)

The Riverwalk is highlighted with exceptional amenities along its path. To the east, visitors enjoy the stunning beauty of Fredenhagen Park with its landmark clock tower and Exchange Club Memories Fountain. Near City Hall, Naperville Jaycees Park provides flexible outdoor workspace with seating, shade, and power sources for electronics.

Midway, the Dandelion Fountain, Paddleboat Quarry and Millennium Carillon in Moser Tower (closed for rehabilitation in 2021) can be found, along with Rotary Harmony Park, a unique amenity consisting of four percussion instruments for residents and visitors of all ages to enjoy. Further west is historic Centennial Beach – a popular family destination – Centennial Park with its inline skating/skateboarding facility and the Jaycee Playground – an ADA-accessible recreational area.

After considerable public outreach, the Naperville Riverwalk Commission has prepared this Riverwalk 2031 Master Plan to inspire the community and its leaders and to guide Riverwalk policy and resource allocation. This plan defines a compelling bicentennial goal, measurable objectives, exciting projects and a thoughtful implementation process that, when complete, will maintain the Riverwalk’s extraordinary cultural, environmental and economic impact on Naperville’s success.

Highlights of the 2031 Riverwalk Master Plan include:

As Naperville’s “Crown Jewel” and most frequently visited park, the Riverwalk is maintained with care by Naperville Park District staff, with support from volunteers. Anyone who is out walking on the Riverwalk on a Wednesday or Friday morning might see a group of volunteers pulling weeds in a flower bed or digging up invasive shrubs in a wooded area. Learn more about becoming a Riverwalk volunteer by clicking here.

The Naperville Riverwalk features 1.75 miles of brick paths, fountains, bridges, meeting and event places, outdoor sculpture and artwork, recreational facilities and celebratory memorials. If you are planning a trip to the Riverwalk and are using a GPS device for directions, please use the address at the bottom of this page, which will take you to the middle of the Riverwalk.

The Commemorative Brick and Legacy Gift Program is administered by the Naperville Riverwalk Foundation. The program continues to offer the opportunity to purchase a variety of gifts in the form of bricks, pavers and memorial benches to:

More information is available on the program page.

There are many events held on the Riverwalk throughout the year, including fundraising walks/runs/triathlons as well as seasonal events and story times. The Park District is responsible for scheduling many of the events while the Naperville Public Library hosts the children’s story times. For the most up-to-date Park District event information, please visit www.napervilleparks.org. For up-to-date Naperville Public Library information, please visit www.naperville-lib.org.

To inquire about scheduling an event on the Riverwalk, contact the Naperville Park District by emailing info@napervilleparks.org or calling (630) 848-5000.

Weddings and Other Events

Yes, it is possible to hold your wedding or event on the Riverwalk. There are three locations that can be reserved for a fee. They include the Grand Pavilion on the west extension, the Millennium Carillon in the Moser Tower and the Riverwalk Amphitheater located on the Southeast corner of Eagle Street and Jackson Avenue.

Photos are allowed on the Riverwalk. No permit is necessary. However, we ask that you keep in mind that the Riverwalk is a public park and to please be courteous of other people who are trying to enjoy its amenities. 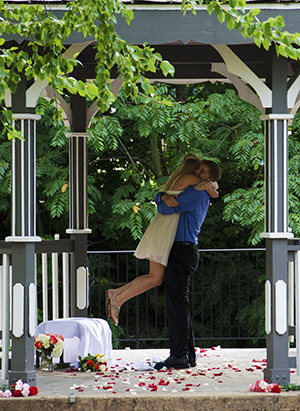 For more information about availability and fees, please e-mail the Naperville Park District at info@napervilleparks.org or call (630) 848-5000.

Check out the exciting new plans to ensure the Riverwalk remains the Crown Jewel of Naperville for generations to come.