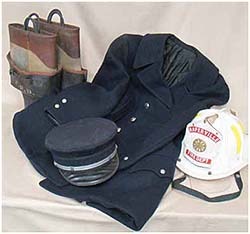 The Naperville Fire Department was founded and chartered by the City of Naperville and State of Illinois in 1874 after two major fires occurred in the downtown area.

The main station remained in the downtown area until 1992, at which time the Fire Administration Building was constructed at the Public Safety complex on Aurora Avenue.

The NFD protects more than 146,000 people in Naperville and the surrounding unincorporated Naperville Fire Protection District. Residents are served by 10 fire stations. The administration is office located at 1380 Aurora Avenue.

The Fire Department has taken measures to address the area's rapid growth. A comprehensive 20-year Master Plan for the delivery of Fire and Emergency Medical Services has been in place since 1989, and is updated every three years. In addition, the Naperville Fire Department is one of a select few Fire Departments in the U.S. to have been awarded accreditation status by the Commission on Fire Service Accreditation International.

Donate a Piece of History

Employees or retirees who would like to donate memorabilia related to the Naperville Fire Department can contact Registrar Sarah Buhlig at (630) 548-1115 or buhligs@naperville.il.us.