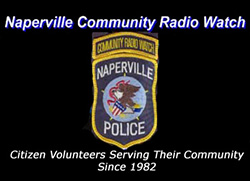 Naperville Community Radio Watch (CRW) was established in 1982 by the police department utilizing a group of citizen volunteers who were interested in helping their community. CRW members receive specialized training from police department personnel and since the inception of the program, have logged thousands of patrol hours acting as additional eyes and ears for the Naperville Police Department.

CRW's intent is not to replace the patrol activities of police officers but to provide the police department, and the citizens of Naperville, with additional individuals trained in police observation capabilities to reduce crime and enhance public safety. These volunteer citizens supplement the police force as observers of suspicious or criminal activity. Additionally, CRW provides additional police department supervised security at special events including parades, triathlons, city fairs and activities. Responsibilities include:

Applicants must comply with the following criteria:

If you are interested in making a difference; being part of a growing, recognized and diverse organization; and want to help maintain Naperville as a wonderful and safe place to raise a family, call the Naperville Police Department at (630) 420-6779, email NapervilleCRW@gmail.com or download the following application and return it to the Police Department, as indicated on the form.

Community Radio Watch has received many commendations from state and local officials and has been featured in the Daily Herald, Chicago Tribune, Naperville Sun, NBC News and the National Publication, “The Police Chief.” CRW and the police department have been contacted by countless police agencies and citizens groups from as far away as Canada and Great Britain interested in learning about CRW.

Watch our interview on NCTV17's Spotlight